The Melbourne Ports Candidate Forum last night was a great opportunity to answer some questions and for me to explain a bit about the Secular Party and our policies.

There were several questions about gay rights, and again I challenged Danby to take that one extra step and support same-sex marriage. He has not come out and publicly declared his position before, but with three gay candidates up on the stage he clearly felt the pressure to say something:

“I’m not saying that at this election that I support changing the legislation for gay marriage but it’s coming and in the next government I will expect there will be serious movement within the Labor party on that issue and I know a number of other people apart from myself will be running with it. “

It’s gratifying to know that the Labor Party is re-examining it’s position on same-sex marriage and if they are returned to government we can look forward to a significant change to the Labor Party policy.

The Liberal Candidate for Melbourne Ports is also in favour of gay marriage, and has stated that he would cross the floor to vote in support of equal rights. 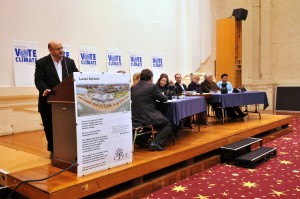 Keep up to date with my blog!