Same-sex Marriage – Where is Danby?

On Saturday  Equal Love ran rallies across Australia to highlight the issue of same-sex marriage.

On August 13th 2004 the then Howard Government inserted into the Marriage Act a clause that made marriage between one man and one woman, the Labor party supported the legislation. 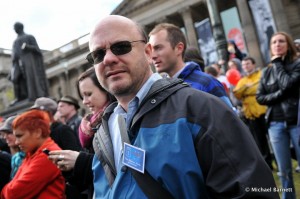 The Liberal and Labor Parties have to date refused to make any move on the issue.  At the recent Candidates Forum Danby said that he supported same-sex marriage, and yet the Prime Minister continues to tell us that the policy of the Labor Party will not be changing, Ekendahl also promised to cross the floor to vote in favour of ‘equality’ although he gave no undertaking to vote for ‘marriage’ for all.

Yesterday, where were they?  For all their talk about how important this is, the people of Melbourne Ports are entitled to know why they weren’t leading the charge with their placards of nicely snapped portraits with their “VOTE FOR ME!”   It would have been an uncomfortable march for them, but it really would have shown the community how important they think equality is.  They could have explained their personal position and then explained how they will change the unfair law within their parties.

The Secular Party of Australia is the only party that will deliver equality for all, we firmly believe that the separation of religion and state is needed to stop religion influencing our laws.

The continued attack on the equality of all Australians by the Catholic Church, the Australian Christian Lobby and Family First needs to be kept in check.  Our laws need to be made on secular grounds, with rational reason.  Nobody is asking, or expecting, the churches to embrace ‘gay’ marriage, but the law must be for all Australains, not a law that Christians wish to enforce on everyone.

Keep up to date with my blog.  Enter your email address!
This entry was posted in election 2010 and tagged danby, ekendahl, gay marriage, melbourne ports. Bookmark the permalink.

3 Responses to Same-sex Marriage – Where is Danby?